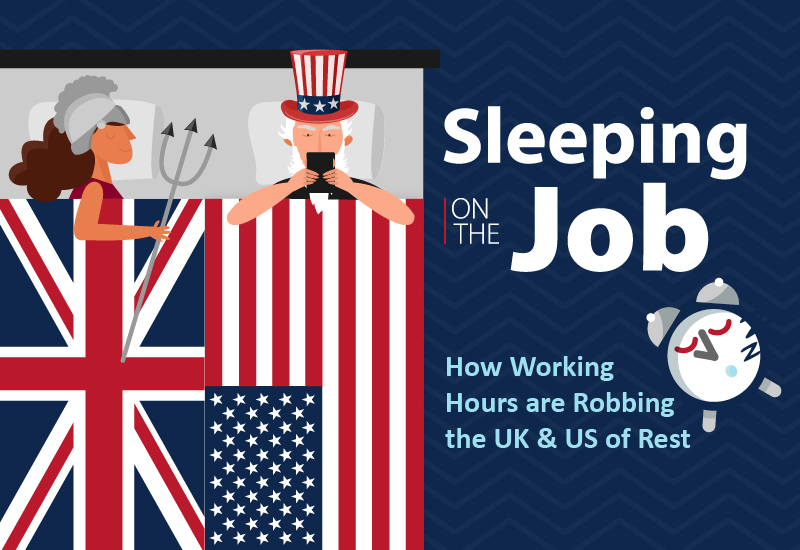 Is Work Stress Robbing the UK & US of Sleep?

It’s no secret that in our increasingly fast-paced economy, people’s sleep is suffering at the expense of earning a decent living.

Studies have shown that workers in the UK and US are getting less than the recommended amount of sleep – both clocking up an average of 6.8 hours to be exact – which can negatively impact everything from people’s performance at work to physical and mental health.

Having studied how career stress affects nightly rest in both countries, here are the key findings:

Work-related stress is keeping the UK & US up at night

Any form of stress has severely negative consequences on your sleep patterns. Unsurprisingly, work-related anxiety is one of the leading causes of the national snooze shortage. Here are the locations in the UK and US which reported the highest job stress levels which directly relates to a lack of sleep.

The figures above are from a 2018 study from employee incentive provider, Perkbox, that showed the top 10 most stressed-out areas in the UK due to work. This kind of anxiety has a hugely detrimental effect on sleep patterns so it’s no wonder that 65% of Brits cite work as the cause of their lack of nightly rest.

Needless to say, losing sleep every night can have negative consequences. It doesn’t just affect your work performance – but also on your overall wellbeing. A large part of the stress causing this sleep shortfall is the hours we all work. Long working hours leaves little time for work/life balance.

Let’s take a look at how the UK and US compared to the often-celebrated employment hours of the EU.

Research conducted by the University of California has found that by increasing the amount of sleep you get by 1 hour a night (assuming you’re getting less than the required amount) you could increase your wage by as much as 5%.

This may seem too good to be true but, when you consider the negative aspects of poor sleep…

…it’s clear to see why an extra 60 minutes of shuteye could dramatically improve your performance at work. Unfortunately, this proves to be a bit of a paradox as it’s the stresses of work that keep many of us from achieving the recommended amount of sleep in the first place.

On the opposite side of the coin, a Sleep Council study of UK workers has shown that people who earn more tend to get a longer, better-quality night’s sleep.

A lack of sleep won’t just hit you in the pocket. A study by the National Center for Biotechnology Information found that sleeping for 6 hours a night for 14 nights (as opposed to regularly getting 8 hours) caused ‘cognitive performance issues’ equivalent to having two full nights of total sleep deprivation.

Which jobs are the most stressful?

There are a number of similarities between the UK and US when it comes to which professions get enough sleep. This extends right to the very top of the ladder.

Although those with more money have been proved to sleep more soundly, this doesn’t always translate into roles with a huge amount of responsibility. Take the leaders of both countries as an example…

This unhealthy sleep standard being set by those in powerful positions could be sending the wrong message to employers and their workforce. There is no evidence to suggest that less sleep correlates to greater performance – in fact, it’s actually highly detrimental.

Here is a comparison of the most stressed and, therefore, sleep deprived professions in the UK* and US** to show where the main problems lie:

Most Stressful Jobs: US

There are some interesting disparities between the most stressful jobs in the UK and US. The UK’s most anxiety-inducing careers are largely focused around healthcare and child development. This makes sense considering the growing pressure on both the NHS and the education system.

The US population feels frazzled in a more diverse range of professions. A spectrum that includes both food preparation (chefs and servers) and emergency service work. The former is likely due to the fact that pay for these roles is notoriously low for the hours worked. The latter is clearly down to the danger involved in day-to-day duties.

The effects of sleep deprivation on the economy

To put the negative effects of sleep deprivation on the global economy into context, this map shows its impact on the GDP of five world-leading economies:

These shocking figures show that a bad night’s sleep isn’t just affecting the average worker’s day-to-day. At scale, it has a tangible effect on the global economy. This is how much sleep deprivation is causing the UK and US annually per head:

With most signs pointing towards work-related stress being the cause of many people’s problems getting shuteye, perhaps it’s time for companies on both sides of the pond to address the sleep crisis.