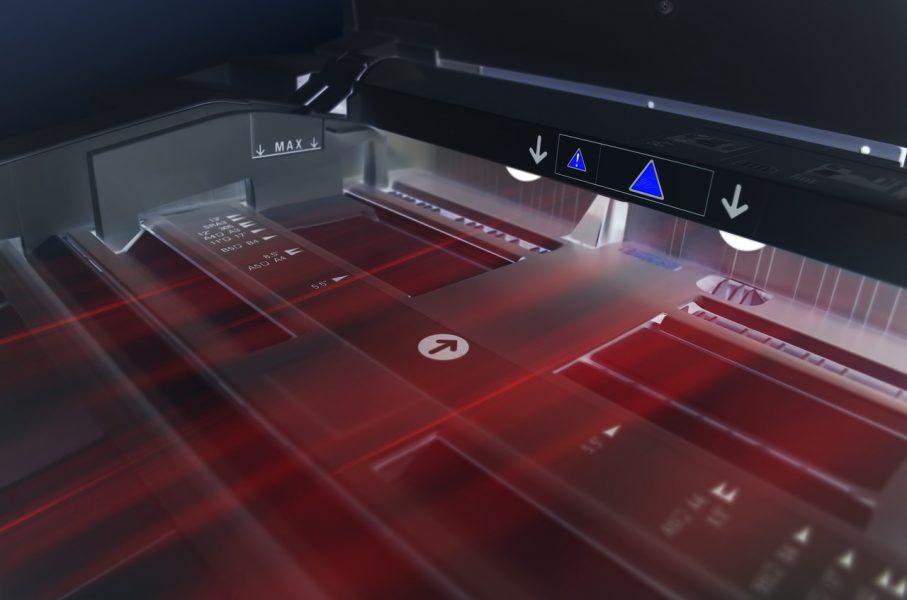 LED laser printers have given laser printing technology an upgrade. OKI printers were the first to use LED lights in their machines in 1989, and in 2012 introduced white printer toner to their colour laser printers.

While they operate very much like regular laser printers, LED laser printers have a key difference that means they offer a different set of strengths.

Their printing process is essentially the same as a traditional laser printer, using a drum and a fuser to apply powdered toner to a blank page. However, instead of electrical charges being created by a laser and moving mirror, as with a laser printer, a strip of static LED lights is used instead.

This difference in technology used leads to several factors that separate LED printers from laser printers. Here are the benefits of an LED laser printer.

Benefits of an LED printer

LED printers can be made much more compact than their predecessors because their printing mechanism doesn’t rely on moving parts such as the mirrors that make regular laser printers work. This means they’re great for keeping in small home offices without taking up too much space.

Even in the case of multifunction LED printers, products are available that remain compact while offering broader copying, scanning, and faxing functionality.

In traditional laser printers, the movement of mirrors and lasers means that they can be loud when in operation. LED printers are much quieter, so printing can be done in quiet offices without disturbing anyone, or late at night or early in the morning at home without risking waking anyone up.

The mirror and laser elements found in traditional laser printers also present another issue in that they are fragile and prone to breaking more easily than other parts. As there are no moving parts required in the LED printing mechanism, they’re more reliable and longer lasting than laser printers.

LED printers are generally faster than laser printers and most inkjet printers, meaning upgrading to an LED printer can take your printing speeds to new levels.

LED lamps require very little warm up time, so they can be switched on and off instantly, meaning theirs is only a minimal wait before the first page of your document starts printing.

They also offer exceptional print quality. The Xerox VersaLink C500N is an A4 LED colour laser printer that prints at up to 43 pages per minute and up to 1200 x 2400 dpi. Although high quality prints aren’t always necessary in business, they’re ideal for impressing potential or current clients or customers.

Although LED laser printers can be more expensive up-front compared to more traditional inkjet printers, the lower cost and better longevity of laser printer toner as opposed to inkjet ink can make all the difference in the long run.

With an LED printer, you’ll notice your printing consumables cost less and last longer, saving you money over time despite the higher initial cost.

If you’re worried about your environmental footprint, you’ll be pleased to know that LED printers are also more eco-friendly than traditional laser and inkjet printers.

LED lights are considered to be highly energy efficient so, although the difference may be small, replacing a laser or inkjet printer model with an LED based one will reduce the amount of electricity your printer consumes.

Hot on the heels of New Year celebrations, World Introvert Day celebrates the 50% of…

Tips for launching a new tech start up  In the modern digital world, costly marketing…