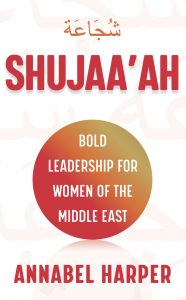 Bold Leadership for Women of the Middle East

A golden opportunity for women to step into the conversation

Debates about gender parity and gender politics continue to be a hot topic globally and have kept the subject of women and leadership at the forefront of business conversations.  There is now growing interest in the Middle East with regards to how women can take more advantage of the new business opportunities that are opening up to them. The pace of change in the region has been fast, and as more women come into the workforce, they are beginning to find their collective voice; demanding equal opportunities on a much larger platform than previously.

The growing potential for female leaders against the backdrop of the region’s rich and vibrant culture is explored in Annabel Harper’s new book, Shujaa’ah, Bold Leadership for Women of the Middle East, in which she reveals how women can take better advantage of the openings which are emerging.

Women’s voices are at the heart of the book and ‘Shujaa’ah’ speaks not only to young women of the Middle East who have career ambitions but cannot move forward, but also to organisations to help them understand what they could be doing more of. It also urges Middle Eastern men to step up to the challenge, because ultimately, none of the changes that need to happen will be effective if they aren’t involved too.

Shujaa’ah is an essential read for anyone who is looking to better understand the evolving role of female leaders in the Middle East.  Described as both a ‘must-read for women in leadership’ and an ‘enlightening read for men’, Annabel hopes that Shujaa’ah will help to challenge long-held unconscious bias against gender equality in the Arab world.

Shujaa’ah is published by Panoma Press and is priced at £12.99.

Choose Confidence and Reclaim Your Happiness

The Entrepreneur Paradox: The Easy Way To Achieve Balance And Wealth

The Easy Way To Achieve Balance And Wealth  Sandro Heitor  £19.99  If you’re struggling to find your path…

WELCOME TO OUR FREE GUIDANCE FOR ALL ENTERPRISING PEOPLE This site includes #MicroBizMatters TonyRobinsonOBE.com EntrepreneursUK.com…