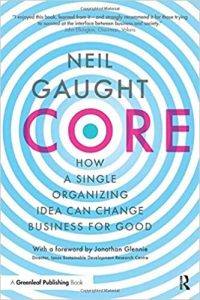 Neil Gaught is a leading light amongst a growing number of business thinkers who are saying companies need to quickly and radically change how they operate if they are to meet the demands of customers, employees, and investors increasingly concerned about the sustainability of the planet and society.

With his ground-breaking book ‘CORE’, first released in 2017 and a finalist in the Business Book Awards 2018, Neil bolstered the case for a complete rethink of the role of business by proving change is not only unquestionably necessary but entirely possible.

In his second book, ‘CORE: The Playbook’, released in November 2020, he sets out exactly how any business can make those changes possible. Using over 40 diagrams and step-by-step instructions he lays out a suite of tools and approaches that can be immediately employed to cut through all the purpose B*** S*** and identify, define, implement and measure the impact of a Single Organizing Idea (SOI®) that ensures both business and society can thrive in unison in the 21st Century.

Driven by a single-minded desire to help accelerate progress toward a more sustainable future, Neil is able to draw on unique insights gained as a soldier, designer, strategist, entrepreneur, and writer. His highly informed intuition and interest in understanding what works and what doesn’t have been earned ‘on the ground’ over the past two decades advising both private and public sector organizations of all sizes and across many different sectors in over 50 countries.

The potential of an SOI® as a practical management tool and solution to the many challenges businesses face in the fast-emerging social context has attracted significant praise from influential leaders around the world including Triple Bottom Line conceiver John Elkington, Net Promoter Score co-founder Rob Markey, author Charles Leadbetter, organization guru Charles Handy, Rajvi Joshi – Former MD of the B Team, the former Secretary-General of Amnesty International and Executive Director of Greenpeace Kumi Naidoo, entrepreneurs Julian Richer and Chip Conley, celebrity fashion business leader Patrick Grant and many others.

“Though the tides of change are engaging the minds of business leaders, most are still trapped behind their brands and an approach to corporate social responsibility that is out of step with a connected society that increasingly questions ‘who’ these businesses really are and what drives their purpose

CORE is about how businesses can adopt a Single Organizing Idea and, more importantly, why they have to. Its no-nonsense approach sets aside the ideals to confront the realities of business reform. It demonstrates the power and potential that a Single Organizing Idea can bring to any business prepared to take its head out of the sand and proactively respond to today’s challenges.”

CORE: How a Single Organizing Idea Can Change Business For Good – £29.99

Why One CEO Is No Longer Enough

The Seven Sins of Innovation

By Dave Richards Palgrave Macmillan  £22.99     Innovation and entrepreneurship remain two of the most discussed…

Investing for the future is destroying the planet

The term ‘sustainability’ is kicked about on a daily basis. Whether it is being debated…